Times flies, summer term has begun and another four fabulous art projects are under our belts. Last term I worked with years 1, 2, 3 and 4 inspired by Grace and Family,  A Necklace of Raindrops, Varjak Paw, and The Pebble in my Pocket. There was as much learning for me as for the children, which though scary at times in terms of familiarity and sureness leads to exploration and invention and that trade off is worthwhile.

This term begins with year 2 and One Night, Far From Here and year 4 and I was a Rat or The Scarlet Slippers. I'm planning activities including print, textiles, digital media and as always, drawing drawing drawing! I enjoy building relationships with the children and my aim is to ensure that they are not overwhelmed by art, that they feel it is for them (if they want it) and enable them to shine and share their marvellous outlooks and ideas. I, in turn get my weekly fix of kindness and fun, they are a great bunch of small people. After my two days at Drew I go to sleep to the sound of Miss Logan, Miss logan ringing in my ears, which may sound unpleasant but is actually nice... Sometimes I feel rather famous as I pass children in the corridors and they beam and say my name. The workload can be a challenge, everyone in school is very busy BUT this chance to reach a whole school is a great and rare opportunity. 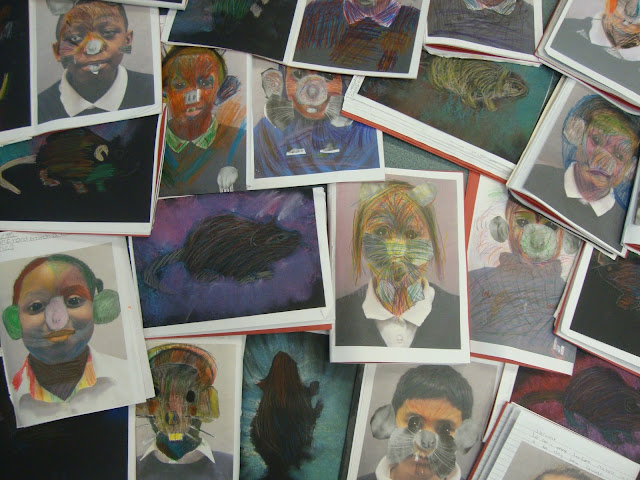 I was a Rat! Year 4 pupil transformations
Posted by Karen at 12:39

Once my dad taught me something about the world. He drew into the dust layer on our slab path a circle with the end of a stick, within this circle he drew a smaller one and told me how the earth was hot at it’s centre, a molten furnace, a core of matter turned liquid. Small, sitting with ease on my haunches, I believed him unquestioningly, my insides churning, I knew he knew.

To collect firewood we journeyed beyond the threshold of the house into my safe place, the remains of a once huge woodland. Resonating with sound the wood accepted our silence, drawn onwards by genteel swaying branches, graceful arms embraced us in turn. Almost unheard through its consistency a chorus of birds tweet and twitter, tiny hearts thump beneath feathers, announcing temporary ownership of space and air, a melodic roosting.

In the chill dusk breath is visible, vapours entwine and disappear into the ether taking with them words which shall remain unsaid. Puffing out my breath steam engine fashion I pretend to smoke with long theatrical drags, holding an invisible cigarette to childish lips. My father smokes a real cigarette and I receive praise for rolling Golden Virginia with my nimble fingers, unknowingly giving emphysema a helping hand.

At the cusp of day and night, the boundary between light and dark, the sun gently lowers itself to the horizon and we search for brittle wood, the deceased of the forest. Daddy longlegs drift out of wild grass, I shiver at the sight of their gangling thread legs.

We glimpse a small tree the width of a mans thigh, dry dead wood, asking to come indoors, to warm bodies and dry newly washed golden hair. Dad on one side, me on the other, pushing the trunk first this way, then that. Loosening its grip, back and forth, a wobbly tooth in a gummy hole. With a sharp crack and splintering an eco system dislodges, woodlice curled in defensive armoured spheres take a fall. I feel a lichen layer beneath my fingernails, the texture of bark imprinted upon impressionable palms. The scent of newly exposed earth and heartwood seeps up into my nostrils with the prickly realisation of how dark it has become.

We drag our bounty across the road. Cold air clings to hair and skin and clothes, a halo of chill outside-ness. Over the threshold without ceremonial sawing the uncut trunk is pushed into the fire, the tree divides the front room and sprinkles its earth print.

The fire wakes and flames tentatively trace minute bark undulations, register each surface to acknowledge the form to be consumed, a tender shy approach before taking hold and roaring victory. A victim of spontaneous combustion, a limb hangs from the fire with a blackened knee joint, as the fire takes another bite the trunk/limb is pushed into this insatiable mouth, until hours later all that remains is blackened charcoal and a soil shadow upon the floor. I sit warmed in my nylon nightdress, cheeks burning as the air in the room solidifies, pinning me to the spot, my insides churning.
Posted by Karen at 17:23