The 1st of May was my official first day as a studio holder at Haarlem Artspace in Wirksworth. Haarlem Artspace is at a point of growth and transformation - expanding into the ground floor as gallery, communal kitchen and studio spaces and rearranging/rejigging the second and third floors, with new creatives joining Haarlem artists. Along with a palpable unease around such changes, there's also an expansive, outward and welcoming energy, of invitation, of question - who are we? What do we stand for? What could we conjure within the walls, beyond these walls?

Haarlem Mill is a building with presence. It was built by Richard Arkwright in 1780 and was the first steam engine powered cotton mill in the world. Haarlem sits in beautiful surroundings, green space footsteps from the door and Wirksworth, a short walk away is an attractive ex-mining town, with shops, cafes and a cinema. I get the bus to the studio and watch the landscape roll by, during the 20 minute trip the realisation that I live here creeps into me again and again... I've not quite landed yet, having moved from London nine months ago.

A week after moving into the studio Haarlem hosted 'Collectivism', a four-day residency and one-day Resilience through Collectivism Conference, bringing people together for an exchange of ideas on the themes of collectivism and collaboration. The residency was jointly facilitated and co-curated by artist Alice Gale-Feeny and artist and Haarlem Artspace Director Olivia Punnet.

The ground floor space was so new, having just been made useable the weekend before. It was wonderful to see the space animated and full of people, greeting each other, sharing the pick and mix breakfast on offer and beginning to create a shared space. We each introduced ourselves with an image of our work, and I loved that, connections in practice were revealed, links tentatively formed, potential given breathing space. As well as Haarlem studio holders and associate artists, there were four selected artists who'd answered a call out on Arts Jobs (Arit Emmanuela Etukudo, Hayleigh Longman, Penny Newell, Adam Moore) plus guests from Instituto Procomum from Santos, Brazil - Haarlem's partners on the British Council's Developing Inclusive and Creative Economies programme.

There was an air of tension as the inner participants began the conversation. There was one empty chair in the inner circle and a number of empty chairs on the outer circle, everyone had the choice to move from a speaking chair, to a listening chair. As the discussion flowed the room became dynamic with movement, then stillness, as the group shared and listened with intent. The conversation took fascinating/unexpected directions, more so than if everyone had been allowed to speak at anytime. It also meant that at times, those on the outer circle might have a response but the opportunity to move into a speaking chair would be missed, or the conversation had moved on by the time they got there...

A highlight from the morning of the conference was the 'On Resilience' workshop with Lottie Randomly, leading to deep sharing and connection with conference participants. During the afternoon it was fascinating listening to Georgia, Marilia and Simone, directors from Instituto Procomum share the work from their hub in Santos, and their new Colaboradora project. Introducing the idea of the Commons and commoning as an institutional practice, a way of seeing, a framework.

Haarlem Artspace created a space of care, with a variety of food and drink available during our time together, releasing the group from a mundane daily task... The indoor and outdoor spaces around the mill building provided breathing space, communal space to share informally and be together, to wander and wonder.

Such a precious gift. 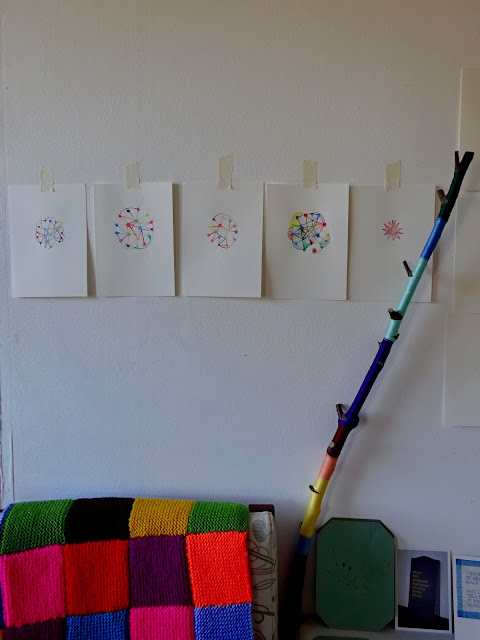 Watercolours in response to our fishbowl conversation
Posted by Karen at 23:48